My Faith, then His

I sought for the meaning of life
in politics, until I found it in
the Lord Jesus Christ

I grew up attending a Presbyterian church in suburban Chicago, going to Sunday school and church services regularly until I was confirmed. I desired to please God and for a while even wanted to be a minister, since our minister was so highly respected in the community. But I also remember being troubled as I read the Sermon on the Mount. “Who,” I wondered, “could ever live a life like that?”

In any event, during my high school years in the early ’70s thoughts of God took a back seat to other things. Namely, I began to get interested in politics, to the point that it became the meaning of life to me. My family was very active politically and even in high school I was fully caught up in it myself.

The Capitol Building
in Washington, D.C.

While in college I adopted the view which teaches that, while God did create the universe, He’s no longer directly involved with it but instead lets events take their own course. I didn’t think much about God anyway. Conveniently, believing as I did, I was free to pursue whatever political cause seemed most in need of my attention at the time. During my four years in college I went to church twice.

Turning Back to God

My indifference toward God  began to change after I graduated in 1980, when I took a job as a writer with a small east-coast magazine. The job itself caused me to think about God again, since I often covered religious issues. The magazine’s editor, a Roman Catholic, introduced me to the writings of C.S. Lewis (Mere Christianity, The Screwtape Letters), which I found compelling. For the first time I began to read the Bible in a consistent way. By the time I left the magazine  early in 1982, though I still felt that God was quite distant from man, and from me in particular, I hoped that  in my life I could somehow serve Him and please Him.

I moved to Washington, D.C., early in 1983, still pursuing a career in politics. My reading of the Bible, however, was giving me some hints that God was not so far away as I had thought (and, to be honest, had hoped). I was touched by the story of the poor widow who cast her two pennies into the temple treasury, and how Jesus said she had offered more than all the wealthy (Luke 21:1-4). Since so little could be done with her offering, why did Jesus say that it was more valuable than theirs? If God’s concern was only for the world as a whole and not for human beings on a personal level, it didn’t make any sense.

Through the church I began attending I soon met the three people who, together, helped me trust in the Lord Jesus as my Savior. Mike and Mary were a couple to whom I was immediately attracted. They introduced me to Bill, who was also new to that church. Although I couldn’t quite say why, I wasn’t so comfortable with him, but Mike and Mary thought very highly of Bill and of his walk with the Lord and so I accepted him, too.

The third Sunday I went there Bill invited me to lunch. He told me how he had become a Christian and then he asked me something I don’t think I’d ever really considered before: What makes a person a Christian? I had wanted to serve and please God—but was I really even a Christian? After I made some kind of guess, Bill showed me a portion from the Bible, Romans 8:9-10:

“If anyone does not have the Spirit of Christ he does not belong to Him. But if Christ is in you….”

This was very definite. It wasn’t some vague standard about ethics or going to church. All that mattered was, did I have the Spirit of Christ or not? Was Christ living within me or not? I had sought the meaning of life in politics, but this was reality itself.

After lunch, Bill offered to pray with me. Even as we sat down on a park bench I thought to myself, “This isn’t me; I’m just not the kind of person who does this sort of thing.” I prayed anyway, that God would forgive my sins because of the blood of Jesus His Son and come to live within me.

It seemed that nothing dramatic happened, at least outwardly. In fact, the thought came to me as I walked home that I hadn’t really meant what I prayed, that I had only done it out of politeness to Bill. My response to this was to pray on my own when I got back to my apartment. I told the Lord, “If I didn’t mean it then, I mean it now: I want You as my Savior.” From that moment until today I have always known at least one thing: I do, and I always will, belong to Jesus Christ. And I soon had a strong desire within me to love God with all my being; it was just so simple.

I am the Lord’s!
Oh joy beyond expression;
Oh sweet response to
voice of love divine!
Faith’s joyous “Yes!”
to the assuring whisper,
“Fear not! I have redeemed thee;
thou art Mine.”

“Lord Jesus, save me from my peril!
I believe in You as my way of salvation.
You died for my sins and rose again
from the dead. Thank you, Jesus!” 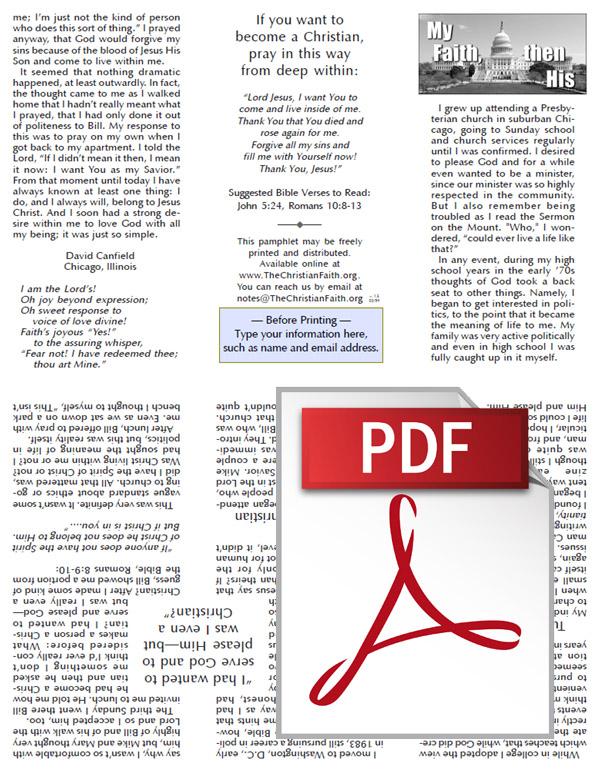